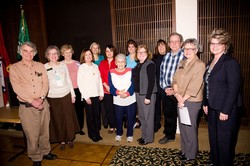 This is the link to a video about our activities - please enjoy!

The Keep Arkansas Beautiful Executive Director spoke at The Sherwood Chamber of Commerce in 2005 giving rise to an interest here in Sherwood with the blessing of Mayor Bill Harmon.  Spring of 2006 Herschel Bowman took the ball and ran!  Those who indicated a real interested were to attend a formation meeting May 27.   Proud of America and Sherwood, a group met each month with new people in attendance each time learning the Keep America Beautiful and Keep Arkansas Beautiful ropes.   Mr. Robert Phelps, Keep Arkansas Beautiful’s new Director stated to get anything accomplished a motor needs a spark plug.  With Keep Sherwood Beautiful group being the motor, it was decided that Herschel was our Spark Plug, thus he got his nickname – “Sparky”!

It was decided we would meet regularly on the fourth Tuesday of each month at the Bill Harmon Recreational Center at 4:00 PM.

Our Mission statement was developed along the lines of the Keep Arkansas Beautiful mission Statement.  It is:

To empower the citizens of Sherwood in the areas of Beautification, Litter Prevention and Recycling.

By November 28, 2006 all requirements to become a Keep America Beautiful affiliate had been completed and turned in to Keep Arkansas Beautiful.  We began the process to be a fully Non-Profit Organization – a 501 (c) 3 rating.  All donations to us will be tax deductible.

January 18, 2007 was the BIG day we worked so hard toward!  Sherwood, Arkansas became an affiliate of Keep America Beautiful, a very prestigious association.  This shows visitors and investors that we care about our community – about Neighborhood conservation and Economic development. We were officially certified as Keep Sherwood Beautiful, an affiliate of Keep America Beautiful.

May 18, 2007 we had our first Great American – Sherwood – Clean up.  Thirty five workers arrived at the City Hall Parking lot to divide into teams to clean several areas within the city

Life is what happens when you are making other plans so as of June 4, 2007, an Executive Director was acquired – Betty Barnhardt (Mrs. Walter C.).   She would be volunteering her time and efforts.  Herschel Bowman kindly donated a corner of his Bowman Realty office’s lobby located on 4221 Richards Road in North Little Rock.  She fondly calls it “Our Little Corner of the World!”

Early summer of 2007 The Rose of Sharon bushes were given to the Veteran Memorial.  July of 2007, our 501 C 3 certification arrived

August 1 to 4, 2007, June Fitzgerald and Betty Barnhardt attended the Keep America Beautiful conference held at the Peabody Hotel in Memphis, TN.  This was the first time it was so close to Arkansas!

During the May Great American Cleanup, Troy Bilt donated two vac/mulchers and we won one!

The Committee for the Fall Great Arkansas Clean-up went into action.  October 13, 2007, we had the great “This Mum’s for You” promotion which beautified several flower beds in Sherwood

April 5th a tornado ripped through our city.  Our planned April 12th Keep American Beautiful Clean up concentrated on picking up tornado damage around the High School.  We had 121 volunteers of all ages arrive.

Another big day in the life of KSB.  Our office moved May 1 into Sherwood!  It is located in the Hot check Department.  The city provides a computer and phone line.

February 9th we moved into a really nice office courtesy of W. Michael Powell, Attorney at 2303 East Lee.  It is large and has a window!!

April 2 our Executive Director, Mrs. Betty Barnhardt, received the Woman of the Year award from the Chamber of Commerce!  Herschel Bowman nominated her and the reason he stated was “You know.”

April 16th we had a ribbon cutting and reception for our new office!

November 13 & 14 we sponsored our first Shredding event for the community.

February we paid for a fence at Cherrywood Park to help the kids keep their balls out of the lake.  We bought the supplies at cost thanks to United Fence Company.  City employees put it up.

April 23th we sponsored a Butterfly Garden at the Amy Sanders Library.

July 16th Cintas sponsored our Shredding event – now called the Shred-A-Thon!  It was held on the Walmart Neighborhood parking lot.   It was SO HOT!  We will never do this in the summer again!!!

October we began our Yard of the Month Program just in time to enjoy the Halloween Decorations!

April 30th we held a Shred-A-Thon sponsored by CintAs.  Sherwood Police had a Drug Take Back station with us.

November 28 through December 2 was the Keep America Beautiful National Conference in New Orleans.  June Fitzgerald and Betty Barnhardt attended.  They had a grand time coming home with many new items, ideas and knowledge.  June gambled so their parking was free!!!!

March 10th we held our Great American Cleanup in Sherwood.   “Clean & Green” writer Larry Brannan came out.  He did a video of workers at Sylvan Hills High School.  March 18th the “Clean & Green” segment was on.  It was GREAT PR for KSB and Sherwood!!

June 2nd in partnership with the Sherwood Chamber of Commerce the Welcome Sign on Highway 107 at the Catholic Church was repainted!

On June 7th we started managing the first Sherwood Farmer’s Market in partnership with the Sherwood Chamber of Commerce.  It was a miserably HOT and HUMID summer!  We held it on the corner of North Hills Blvd and Country Club Road each Thursday from 5 pm to 8 pm.  Vendors paid $10.00 each.  KSB received the money to help them with their projects for the city.  The last one was held August 23rd.

December found us purchasing a banner holder to be placed at City Hall on Kiehl Avenue.  Public Work department erected it.

In January we purchased a lovely banner to be in our banner holder when no other banners are there.

In January we learned that on March 5th Keep Sherwood Beautiful would be recognized by Nestle Pure Life for recycling the most plastic by pounds per city population!  We received $1,000!!

A Sherwood Historical and Preservation Committee has been formed and their first project is restoring a 1930’s gas station, Roundtop Filling Station.  We cleaned it up, and then boarded it with lumber donated by Ridout Lumber Company.

Once again we had a winner in the Keep Arkansas Beautiful poster contest.   Honorable Mention Award was presented to Mishawna Roy.  She attends Sylvan Hills Elementary School.

May also saw the restart of Yard of the Month!  This year we gave little Gnome figurines along with a certificate!

September 24th was the saddest day in our brief history.  Our great Chairman, Don Hughes, passed away.  His service was held October 3rd.  Betty was invited to speak and did an excellent job.

The Fall Shred-A-Thon was November 2.  There were about 142 cars, shredding 10673 pounds.  The truck was bulging so we had to stop earlier than planned!

The Spring Shred-A-Thon yielded 9542 pounds of paper and a lot of cardboard!!!  Our Fall one found 195 cars bringing oveer 10,000 lbs of personal documents to be shredded.

Our Great American Cleanup found several flowerbeds being cleaned up and replanted!  The Cate Elementary School and City Hall benefitted!

June 13th our own Spark Plug, Herschel Bowman was honored for his work in getting us started, up and running!  Keep Arkansas Beautiful celebrated their 25th Greeniversary!  They honored 25 people, called Lodestars, across Arkansas for their outstanding job to keep Arkansas natural, green and litter free!  The new president of Keep America Beautiful attended giving us a nice chance to visit with her.  Saturday was a symposium for affiliates.  All in all a pleasant weekend at Woodland in the Park!

In August our own Executive Director, Betty Barnhardt was named as a Lodestar for the year!

﻿September﻿﻿ found us having a castle building contest during Sherwood Fest using all recycled materials!  Great fun and believed to be the beginning of a continued project!

Our Fall Shred-A-Thon took over 11,000 pounds of personal documents out of the landfill!  The Great Arkansas Cleanup filled 44 huge garbage bags with trash.  We also beautified the new "Welcome to Sherwood" sign on Brookswood!

June Fitzgerald will head a committee to initiate the Great American Cleanup.  A volunteer committee was formed to begin working on this.  She spearheaded our Poster Contest within the schools.  This project will be called "Shine Up Sherwood".

In February Keep America Beautiful changed their logo so we had to also.  This was done.

Arbor day found us planting a tree at the new city park in the Gravel Ridge area which is in honor of our former Chairman, Don Hughes.  We place a plaque at the base of the tree stating it is in Memory of Don.  Many of his family members were there.

In July we learned that we won the ToryBuilt Weedeater Keep Arkansas Beautiful was giving away to an affiliate!

During Sherwood Fest, June Fitzgerald oversaw the Castle Building Contast for kids.  All materials used had to be recyclable items.  A group of Veterans joined in adding an American Flag to their castle!!

Walmart donated $50.00 for us to purchase gardening gloves for small children.  We are very grateful!

Our Chairman, Orland Davis, was presented our award at the Volunteer Awards Dinner this year!!

Again we had an Honorable Mention award winner in the Poster Contest - Sherwood Elementary School.

In July we were given a new computer with Windows 10 - Betty is very happy!  Now for internet upgrade if possible!

Our own Dave Philipps received the Sherwood Chamber of Commerce's Man of the year award!  He is a hard owrker for the City of Sherwood.  Each day that he walks, he picks up any trash he finds.  Recently this activity has been named Plogging!  Plogging started in Sweden!

At this year's Volunteer Awards Dinner our faithful member, Alderman Marina Brooks, received our THANKS!

This October we awarded our first business a Yard of the Month for Halloween on Highway 107!

In April at the Volunteer Appreciation Dinner we presented to Marcia Cook a plaque fr thanks.  Sher has been an active and faithful member since 2006.  She has taken on our Barrel Program.  We have developed new, better barrels to pur around the City.  This is thanks to our supporters!

April 21st we held our popular Shred-A-Thon!  We filled up one truck so in May we held another Shred-A-Thon thanks to Arkansas Records Management out of Hot Springs.  A total for April and May's events was 18267 lbs of paper shredded!

Our May 12th Great American Cleanup was successful thanks to all the Volunteers who came out!

The Yard of the Month program got into full swing in April with a total of 28 homes receiving the Award!  Each month we had different gift prizes to present besides the certificate.  Our newest member, Carolyn Birdsong, has done a grand job with this program.  The Leader is great to publish the photos!  This helps us spread the word!

September 29 we again participated in the Sherwood Fest by sponsoring the Castle Building Contest.  This is for kids to use their talents to build a castle using recyclable materials.  All participants have a great time!  Prizes are awarded.

The Great Arkansas Cleanup was held on October 6.  Our Mayor headed up a team to clean out and spruce up the garden at the Hot Check building.  This was most appreciated by the workers there!

October 20 we held our Fall Shred-A-Thon which shredded 9430 lbs of paper!

The Great American Cleanup was April 6th.  It was questionable due to the weather.  Fortunately the rain held off until the afternoon!  there were 102 bags of trash collected.  In the garden at Hot Check, leaves were raked out and weeds pulled!  There were several places within Sherwood that volunteers cleanup.

April 9th Ken Keplinger was presented our award for the work he does helping KSB.

The May 18th Shred-A-Thon was a huge success!  We had two Shredding trucks available.  About 300 cars came through and over 18,000lbs of paper was shredded!!